The Mad Hatter’s Tea Party Bridal Shower has been accomplished (insert trumpet fanfare here!).  This was so much fun to plan that I’m going to have to do another one, because this much fun cannot be contained to one party.  To gather up grains of inspiration, I hit the original Lewis Carroll books, dredged my mind for details from every Alice in Wonderland based film I’ve ever seen, and spent many an hour on Pinterest to see what others have done.  Then I cut out about 2/3 of that because I do not have unlimited time or resources, but the ideas…the ideas are still bounding through my brain like the white rabbit.

To set the stage a bit here, my dear friend and I have an inside joke.  It loses all humor when explained to outsiders (as the best inside jokes do), but long story short, if either one of us says the words “white rabbit” we dissolve into laughter. (Apparently, I also get a bit of a giggle out of it when I type it too…white rabbit!)  What else would do except for a Mad Hatter Tea Party to celebrate her upcoming marriage? 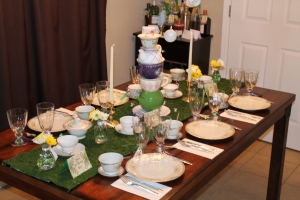 The table ended up being my favorite piece.  The runner came from a craft store, and it is two rolls of moss overlapping each other in the middle.  Each roll is four feet long.  Luckily my table is only six feet long, because the ends are a little ragged looking.  To get a cleaner, but not too clean, look for the ends, I turned them under and left a heavy(ish) object on them overnight.  (Think, good-sized hard cover book.)  Instead of cutting the moss to size, I let them over lap in the middle.  This offered the perfect solution for the fairy ring of toadstools around the centerpiece.  These little cuties from Fairy Small Things’s Etsy Store are designed for terrariums, and come attached to a wire that I bent and slid through the material.  The second layer of moss underneath protected my table without requiring me to disassemble the centerpiece and put tape over the wire.

The centerpiece was created from things that I already had around my house (have I mentioned I like tea?).  It gave me an easily available list of tea party appropriate items to stack up.  Yes, these are merely stacked.  There is no glue, tape, adhesive anything holding them together, and while I would love to say I got it right on my first try, that would be a big fat lie.  I stacked and re-stacked the tower until I could repeatedly bump the table with no noticeable wobbling. (Patience, my friends, and a generous helping of stubborn…probably more stubbornness than patience).

Since I was using both a tea set that my Grandma Joye bought for us to play with and a set of china my mother received from one of her friends, there were a couple of chipped cups that gained new life as magically floating tea cups.  Since I don’t actually have magic, I had to improvise.  I tied them off to the light fixture above the table to create the “magical” look using  clear plastic line (Fishing line, stuff for making jewelry, whatever.  Just make sure it isn’t stretchy.)  Make sure your knots are good and strong, and you’re set and ready to go.

A Mad Hatter’s Tea Party wouldn’t be complete without tags that read “Eat Me” and “Drink Me” for the refreshments.  Fortunately, Creative Elements Design Studio has an Etsy store filled with nifty printables for a Mad Hatter Party.  Since I’m working on not over extending myself, I took her designs and added my own touch with card stock in the bride’s wedding colors and scrapbooking scissors.  The files I downloaded contained table cards, a large banner, a mini-banner, “Eat Me” and “Drink Me” tags, directional arrows, and signs with quotes from the book that I used.  There were also wonderful playing card decorations that I didn’t use (but probably will next time).

Some additional elements that I wanted to include were keys, clocks, crowns and keyholes.  Fortunately for me (and unfortunate for my budget), when I find cool things, I just buy them.  Eventually I find a use for them.  This time it came in the form of scrapbooking decorations (at least I think that’s what they were).  When I was thinking about Doctor Who and Sherlock parties I found these pieces with a steampunk kind of look.  I used twine to turn them into garland to hang from the curtain rod on the back door. (I like it so much, I think they’re going to stay there!)

I also created some Cheshire Cat grins to put in unexpected places.  That disappearing cat always ends up where he doesn’t belong, right?

Since the menu at the Sherlock party was such a hit, I decided not to mess too much with a good thing.  There were sandwiches, a veggie tray, tea, biscuits, cupcakes, and cocktails.

The cupcakes came from Not Your Grandma’s Cupcakes in Broken Arrow, OK.  They have lots of great flavors, and I could create a cupcake menu around the characters every one is familiar with from Alice in Wonderland.

Of course, you can’t have a Mad Hatter Tea Party without tea.  This is where the amazing Adagio Teas came in handy with their

Themed cocktails are always fun, and I enthusiastically scoured the web to find recipes with a Mad Hatter flavor.  The resounding favorite was the White Rabbit, and my favorite was either the specialty mojito or the Mad Hatter Tea Party Cocktail (Note:  No matter what the bartender says, if you shake it hard enough, the shaker will come apart…yes, it will.)

One of the bride’s friends is crafting a signature cocktail for the wedding that incorporates the bride’s colors. We got to be the test subjects for her thoughtful, tasty, and gorgeous drink. Wow, just…it was great. I didn’t mind being a test subject at all. I figured it would be helpful to see if she could replicate the deliciousness, so I had to “test” more than one.

It’s always a little tricky to get people who don’t know each other talking at something like this.  All many of them knew about each other was that they all knew the bride, so to get things started and introduce people to each other in a…less than conventional way, I began with having everyone choose a playing card as they arrived.  Each card had a “mate” and they had to find the guest with the matching card to be their partner.  When they found their partners, I handed out sticky notes and pens.  Each person had to write a person or thing on the sticky note and stick it to their partner’s forehead.  Then everyone mingled to ask questions about who or what they were.  The first person to guess what was on their sticky note won a prize.

This game had no winner.  It just got everyone relaxed, silly and feeling good.  Every time someone said one of the key words they had to wear a hat.  I didn’t expect everyone to be so enthusiastic about this game.  People worked hard to keep their favorite hats.  (If I’d known, I would have made up more rules!)

Every couple has their own love story, and each person who knows them knows a slightly different version of that story.  For this game, take a large piece of paper, and have each guest write one line of the couple’s love story.  Then fold the paper so the next person can’t see what has come before.  When you’re finished, someone reads aloud the story, and the bride has a nice keepsake.  (Note:  It would be a good idea to have the guests include their names.  I didn’t do this, but a comment from the bride made me wish I had.)

The guests were divided up into teams, and each team received a list of items found in the book to acquire pictures of.  Initially, the plan was to send the guests out into the world and the first team to report back to me with a complete picture list would all win prizes.  However, no one felt like going anywhere, so we got creative.  My house became the field for the scavenger hunt, and the teams had to get really inventive to come up with some of the clues.  Fortunately, these were smart women.  When the winning team couldn’t find it, they took to the internet for a picture, and it worked out perfectly.

Since my bride’s ideal bachelorette party included relaxing with cocktails, friends and playing games, I figured it was time to introduce them to Cards Against Humanity (duh, duh, dunnnnnn).  As the box says, this is a “party game for horrible people”. There are black cards and white cards.  The black cards include questions or fill-in-the-blank sentences.  The white cards are the possible choices to answer/fill-in-the-blank…all, I can say is that the more wrong it feels, the funnier it probably is, and the more likely you are to win.

That pretty much sums it up right there.  I laughed so hard my sides hurt.

The party was so much fun to plan, to host, to attend, and I’m excited to see what theme party I can come up with next.  Any ideas?  Want or need help planning your own theme party?  Just let me know!

5 thoughts on “We’re All Mad Here”