LEGOs…It’s the Little Things that Make Me Happy 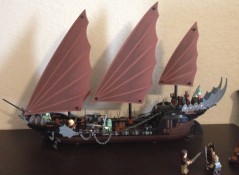 Get it?  Little things?  LEGOs are…okay, I’ll stop.  Sorry, the over caffeinated, sugar high got to me.  Hint: If you haven’t had soda in approximately two years, you should probably moderate that…because otherwise…you get this.

Have I mentioned that I like LEGOs?  LEGOs make me happy.  As a matter of fact, I had a conversation with a friend of mine about them during the holidays.  He was telling me about how he bought LEGOs by the pound online. (I think he said Ebay…maybe.  I’ve slept since then.)  His boys love them, and I have a sneaking suspicion they don’t always play alone.  There was a definitely interest in a pirate ship.  Because, I have a pirate ship now…and I got a castle for Christmas.  Yeah, I know.  I’m in my 30’s and getting LEGOs for Christmas, but who cares.  They make me happy!

A couple of months ago, I came across a great deal on the Lord of the Rings ship from the Lord of the Rings: Return of the King.  Because, if LEGOs make me happy in general, then LEGOs based on my favorite books, movies, or television shows make me incredibly happy.  Okay, it isn’t actually a pirate, pirate ship…but it could be.  I have no self-control.  Could you? 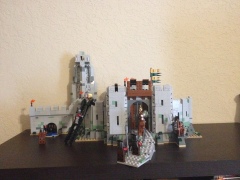 Because I get a childlike thrill out of these toys, of course, my family, who loves me, wanted to give me LEGOs for Christmas.  Woo-hoo!  They got me another Lord of the Rings set.  I now have the Battle of Helm’s Deep…in LEGOs.

So, now you have an idea of how I spent my Christmas night.  Watching the Doctor regenerate in the Doctor Who Christmas Special with some friends, and putting together my castle…there may have also been some mulled wine.  No, I didn’t let my friends help me with the castle.  Sorry! 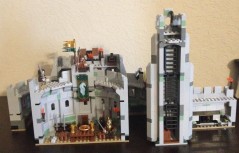 LEGOs have gotten more advanced than they were when I was a kid.  I don’t remember being able to shoot stuff or a catapult to take into battle.  Now, I have catapults, and built-in levers to help me blow up my creations.  The wall the orcs blow up at Helm’s Deep…it really blows up.  I tested it…a lot.  There’s even a side door for Aragorn and Gimli to sneak out and a catapult perfect for dwarf tossing.

Now, I’m in need of some LEGOs with Smaug.  Every good castle needs a dragon, right?  What better dragon to attack my castle than the mighty Smaug?  Is this a thing?  I need it to be a thing. 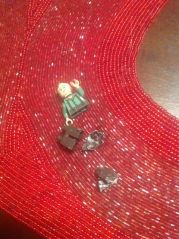 That isn’t to say that the holiday LEGO battles were without casualties.  Unfortunately, poor Frodo died.  Did he die at the hands of Sauron?  Nope.  The poor lad was felled by the worst beast of all.  After surviving  the Nazgul, Moria, Shelob, Mordor, and the fires of Mt. Doom, Frodo met his match in the deadliest of all creatures, the Lord of the Great Toy Wars…..Dexter, a Labrador.

Alas, he looks like such a loving innocent beast.  With the perky ears, and the tail wagging so quickly it is a mere blur.  However, looks can be deceiving.  Dexter is the bane of all toys, large and small.  He just chews them up and spits them out, spreading destruction far and wide. Fortunately, Dex, of the Great Toy Wars doesn’t wreak havoc too often, but when the beast unleashes his fury…beware!  No toys are safe from the Lord of the Great Toy Wars.

P.S. Just count yourself fortunate that your screen doesn’t have the Dexter nose art that mine currently does.  Apparently, he likes you guys too!

Why Geekology 101 you ask? Well, my horizons they are expandin', and I have discovered that I have barely scratched the surface of the amazing stories and avenues to explore. Want to take the journey with me? END_OF_DOCUMENT_TOKEN_TO_BE_REPLACED
This entry was posted on Saturday, January 11th, 2014 at 10:23 am and tagged with Christmas, Dogs, LEGO, Lord of the Rings, Piracy, Recreation, Shelob, Smaug, Toys and posted in Uncategorized. You can follow any responses to this entry through the RSS 2.0 feed.
« Doctor Who Timelines, Because…It’s Friday
Don’t Protect Yourself From Your Art »