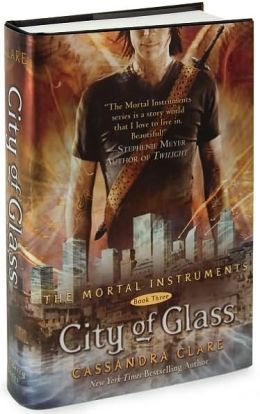 City of Glass by Cassandra Clare

So you may have noticed that I’ve become a bit obsessed. I have read nothing else since I picked up the first of the Mortal Instruments series. They really are quite good. If I didn’t know there were two more, I would tell you that City of Glass is the climax, the epic battle, the resolution, and the answer to all the questions. There are two more books. Obliviously there are still questions to be answered, and this can’t be the resolution that it feels like. I don’t even know what questions need to be answered?  It seems like it all got wrapped up so nicely!

For the first time since I got into City of Bones, I have no idea what’s coming. I’m stumped. It. Is. Awesome. In the last three books, I had a sense of what was coming. Not the shape, size, or exact color of events, but, with a reasonable amount of certainty, I knew where things were going. There weren’t many big freak outs happening here, some really good surprises, yes, freak outs, no.  The big, icky looming thing would get resolved, the sneaky agenda revealed, and everyone happy in the end… well, more or less. There were great surprises, don’t get me wrong, some heartbreaking ones at that, but the story arc followed the path I expected. Now, I’m lost without a map, and I kind of like it. (This in no way, shape, or form refers to my actual sense of direction, thank you very much.)

I’ve become kind of attached to these characters, and even though this felt like resolution to the epic fight that has been happening, they didn’t make it out unscathed. They’ve all come away with scars, and not just the ones left on them by the Marks they use to fight the demons. There is a lot of healing left to be done, and lots of change to come to grips with.  Death, betrayal, political upheaval…and that’s just the beginning.  Regular change jacks with our minds and emotions on the best of days, this kind of change…Well, I figure there will be growing pains.  Not everyone may have grown in good ways either? Okay, now I’m just grasping at straws…or am I?

There’s the emergence of a character toward the end of this book who I can see stirring the pot. Someone with very good intentions….well, you know what they say about those. This person has been an influence, maybe even a driving force the entire journey, but there’s an active role to be played now.  One of those people that you know about but you don’t really get to know very well.  I think we’ll be getting to know this character better…a lot better.  There’s been a lot of upheaval, and people aren’t as they were.  How can they be when nothing else has stayed the same? I can see this character attempting to exert former measures of control, but I don’t know how that’s going to play out at all. (Hint: I don’t think it will go over well.  Does it ever?)  It will be interesting to say the least!

Obsession aside, I may take a bit of a break from Ms. Clare’s world, just for a book or two. The characters are in a good place…I want them to be able to enjoy it for a moment. With a series like this you know the good times won’t last.  Can I stick to it, and let them have their fleeting happiness?  Will I end up caving, just because I am an impatient person who just can’t wait to find out what happens next?

The cold snap of the previous week was over; the sun was shining brightly as Clary hurried across Luke’s dusty front yard, the hood of her jacket up to keep her hair from blowing across her face.

Have you ever gotten obsessed with a book or series?  Which one?  Don’t leave me out in the cold here, my friends.