How Much Sightseeing Can I fit into Nine Hours?

Sunday, June 16, 2013
This week, the capital of the United States! Okay, so I’ve been here exactly one hour and I’m already in love with this city. Seriously, this place is steeped in history! I’m staying at The Madison Hotel and having Sunday brunch at their restaurant, The Federalist.

For reals. Yeah, yeah, yeah I know. I’m geeking out over a restaurant named after a seminal group of papers written by Alexander Hamilton, James Madison, and John Jay about their vision for the United States. You can read more about that here though. I’m not going to bore you with my particular facet of geekdom.

Today is Father’s Day, and since I’m here in this gorgeous city with this marvelous weather, I’m not spending it with my Dad. That kind of sucks, but I do want to wish him a very public Happy Father’s Day. This week, I really wish he was here with me in Washington, DC. He and Mom actually lived nearby when they were first married, and the last time he was here for a visit was in 1984. He’s a Vietnam Veteran and he hasn’t seen the Vietnam Memorial. Being able to see the sights that he’s familiar with and hear the stories of what it was like to live here in the 70’s would be awesome in and of itself, but to see all the changes with him would be amazing. Well, that’s what cell phones are for right? I’ll just have call him and take LOTS of pictures this trip.
This post is going to be a bit different because I have TIME! Time to have dinner with a college friend and indulge my not-so-hidden history geek. So, for now I’m going to finish my truly excellent coffee and blackberry-mascarpone French toast (yes, I know it is just as sinful and indulgent as it sounds!) before I see a bit of US history. No worries, there will be more terrible pictures! I know you would miss them. Maybe one day you’ll be lucky enough to see pictures from an actual camera, but today is not that day. Laters!

Monday, June 17, 2013
Yesterday, I got to meet up with a college friend that I have not seen in too many years to feel comfortable counting. We went for sushi with her amazing family. Her husband and two boys are awesome! I had just a great time catching up with her and getting to know them. So I read the same books as her son. I feel good about this. There were some recommendations made on both sides. (No, I can’t tell you…spoilers!!). Her youngest and I also share a Lord of the Rings passion. He recommended a video game I may actually not die in…well maybe at least not immediately…or eventually…whichever. 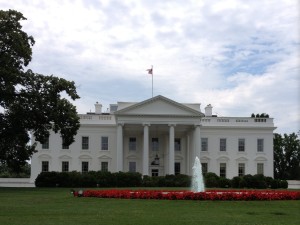 One more thing that I love about all cities when you “live” downtown…walking to work. Seriously, my trip to the conference this morning was a 20 minute walk that took by the White House…the White House for crying out loud! Who wouldn’t love that? Can you imagine seeing this on your “commute” every morning? Amazing!

(I have to say that everywhere I go on vacation there is a major site that is covered in scaffolding. No really – Big Ben, Notre Dame, St. Andrews, Washington Monument all covered in scaffolding when I was there on vacation.) During the hours I walked around in awe of all the amazing, and sometimes astoundingly sad, stories surrounding me, I watched people jogging through the mall. Can you imagine your daily run if you lived here? Just passed the World War II Memorial, only 2.25 miles until the Capitol Building and I’m almost finished. If that was my daily jog….well, I might actually jog!

Monkeys Grasping for the Moon by Xu Bing

If I lived here, I would also spend every Saturday in a museum of some sort. the Arthur M. Sackler Gallery actually drew me in. Well, actually the castle drew me into the courtyard (you read that right. The Smithsonian has a freaking CASTLE!). Then the sign for the Xu Bing exhibit pulled me into the art museum. Do you know Xu Bing? I didn’t until I read an article about his art here. Of course, I had to see some in person. He designed a piece especially for the Arthur M. Sackler Gallery titled Monkeys Grasping for the Moon. Each monkey is the word “monkey” in one of a dozen different languages, and each word looks like a monkey hanging onto the tail of the one above. They’re trying to reach the moon reflected in the pond below, and it is based on a Chinese folktale. Pretty amazing and powerful stuff. (It reminded me a bit about this story about a spider monkey….I’ll have to tell you some other time. Don’t let me forget, okay?)

Tonight I’m eating dinner at The Federalist again. The conference was exhausting! An entire day spent making small talk with strangers, but I think it was productive. I hope it was anyway. I guess we’ll find out if they buy stuff. Did I mention I’m in sales? There was not enough left in me to walk out in search of a new restaurant. It is also official, I think everything here is good. Tonight…crab cakes, and an amazing Sauvignon Blanc. Oh my God, syllabub! Strawberry-Rhubarb covered in vanilla cream. I have no more words, too tasty! (No judging, now. Remember 20 minute walk to and from the conference. Plus museum tomorrow! Again, no pictures, because I ate the evidence before I thought about it. I am sitting on the patio again. Actually I’m at the same table I was occupying yesterday for brunch. There aren’t as many people to watch at 9:15 on a Monday night in DC, but still entertaining!

The conference ended today at about 1:30, and my plane doesn’t leave until 7:00. Well, it is too bad I’m in a city where there’s nothing to do. Ha! Hooray, more museums! On the downside it rained. Oh, it wasn’t that bad. It was warm outside and it was a gentle kind of rain. Not like what we usually get in Oklahoma this time of year with the wind and sideways rain.

Tuesday, June 18, 2013
I walked back over to the National Mall and had lunch at the Pavilion Cafe in the sculptural garden at the National Gallery of Art. There were some amazing sculptures. I captured a picture of one of them when I walked through on Sunday. (I like trees all the time. Just regular everyday trees are amazing works of nature, so of course I took a picture of the METAL tree!)

After lunch I wandered next door to the Smithsonian Museum of Natural History. Oh, my! So much to see, and so very little time! I’m sure that my eyes were just popping out of my head the entire time, and I tried to take in as much as I possibly could with only a couple of hours to explore. There was a brand new photography exhibit that just opened, and I was in awe of the talent that was showcased. I could have spent hours just exploring the details in the photographs, and there was no time! There was an amazing exhibit with some skeletons that they discovered in Jamestown that was fascinating. There were animal skeletons too, but snake skeletons are just as creepy as live snakes…yeah, moving on to gems and minerals. The Hope Diamond! Gorgeous! Then there are the Thompson diamonds. Now, I’m not sure why the Smithsonian has my family’s….jewels, but I think I’d kind of like them back! Okay, so maybe I’m not from the same Thompson’s….then again, maybe I should do a bit of genealogy work.

Well, you’ve heard all about my recent travels. What about yours? What is the favorite place you’ve visited?

Next week, The Grand Lake O’ the Cherokees and Dallas. I swear this month is NOT what my travel schedule usually looks like! Don’t expect this many adventures in the future, usually my life is much….quieter.
‘Til Next Time,

Why Geekology 101 you ask? Well, my horizons they are expandin', and I have discovered that I have barely scratched the surface of the amazing stories and avenues to explore. Want to take the journey with me? END_OF_DOCUMENT_TOKEN_TO_BE_REPLACED
This entry was posted on Monday, June 17th, 2013 at 8:37 pm and tagged with Arthur M. Sackler Gallery, Federalist, Lincoln Memorial, National Mall, Travel, United States, Washington, Washington DC, Washington Monument You can follow any responses to this entry through the RSS 2.0 feed.
« The Desolation of Smaug
Young-Adult at heart! This week’s review: Divergent by Veronica Roth »

One response to “Washington, DC”