Have you ever heard of Saul Bass?  Even if you don’t know the name, you’re probably familiar with his work.  Some of the most recognizable logos in the world were created by his hand, United Airlines, Girl Scouts, United Way, and that doesn’t even touch on his film work.  Psycho, Spartacus, Exodus name a few of of the films he designed for.  The power in Bass’s work comes, in large part, from its simplicity.  His ability to take a big concept and condense it into a few lines is magnificent, and this is my first tiny step toward being able to do the same kind of thing. 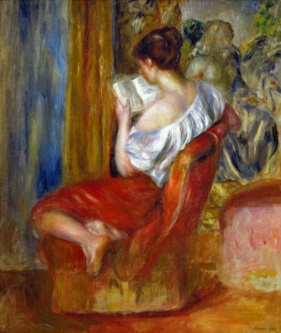 The reading woman, by Renoir, captured my imagination from the first moment I saw it.  Loose brush strokes and intricate walls seemed like the perfect image to simplify.  The challenge would be to capture the energy and vitality of someone engrossed in their reading, at rest yet engaged.

Simplifying the lines of her shirt, skirt, the chair, the background, all that would be simple, but without the right amount of detail, my image would fall flat.  After a few false starts, I discovered that utilizing the correct details is the most important aspect of successfully taking a beautiful masterpiece and keeping heart and soul of it intact while removing a lot of the fine details. 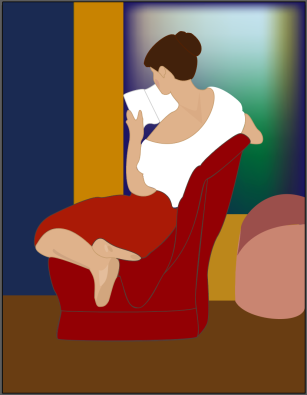 Using, a digital image of the Renoir as a reference, I sketched out my concept by hand and then drew my simplified version in Adobe Illustrator. A few touches of gradients in place of the highly intricate wallpaper in the original served to spotlight her sillouettte.  I also shifted the overall color tone to something a little cooler.  As the variances in color were removed, I discovered that my piece required more color contrast to keep it from becoming a warm toned blob.  I’m really happy with the final product, and I hope Renoir would be too.

What do you think?