You already know I have an…enthusiasm for music, especially of  the live variety. My favorite Tulsa venue is still the historic Cain’s Ballroom ( Alabama Shakes and Seether were the last two shows I saw there.).  Saturday we saw Flogging Molly and Radkey.  I purchased these tickets back in February, as soon as they went on sale, and I’m glad I did because the concert sold out.

I like Cain’s because there’s a sense of immediacy and intimacy in performances at Cain’s that you just don’t get at the larger venues.  My experience has been that there is also an enhanced sense of camaraderie with fellow concert-goers that I haven’t found elsewhere (well, maybe a couple of festivals).

My comrades in music showed up wearing a lot of Flogging Molly t-shirts (of course), Dropkick Murphy shirts, and there were kilts. Surprising, since the band isn’t Scottish, but I’m always happy to see a well-built man in a kilt! 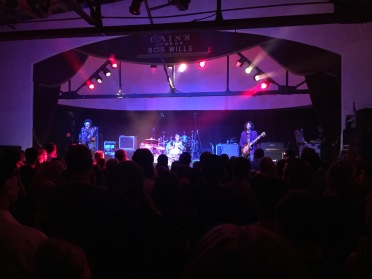 As soon as Radkey’s set began, I was hooked.  Lots of energy, high-intensity, and fun.  The geeky t-shirts and references to Netflix’s Daredevil (which I loved, by the way) made me feel a bit like Captain America in The Avengers, “I understood that reference!”  None of that would have mattered though if it weren’t for the amazing original music which paired well with Flogging Molly’s unique flavor.

My only complaint is that a lot of us had no idea what the name of the band was after their set ended.  I know I asked several people in line for drinks if they knew who the opener was.  They were great, and I definitely wanted to hear more from them.  Thank goodness for Flogging Molly’s own Dave King, who seemed just as excited as the rest of us. He not only gave the band the recognition they were due and the audience was craving, but he also commented that he’d love to play with them again. 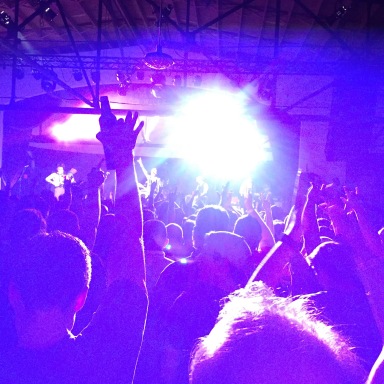 Now, I get pretty excited about my music, I’ll admit.  Losing my voice at a concert isn’t an unexpected event for anyone who has…well, anyone who has ever been to a concert with me.  My husky, nearly non-exsistant voice never stops me from attempting to sing along, shout at fellow concert goers to be heard or talk about the show incessantly for days on end.  Of course, Flogging Molly was no exception.  I’d been listening to their albums for days (possibly weeks) because I was so excited about this show, and this went even beyond my expectations of a great show.  This was jumping around the floor, singing at the top of my lungs, clapping until my hands were sore the next day kind of a show.

They definitely earned a place on the I-will-always-see-them-when-they’re-in-town list.  That list is really short, just two bands…who are nothing alike. Zac Brown Band and Flogging Molly…have I mentioned I have eclectic taste in music?

Who will you always see live when they come to town?

P.S. Today, June 9, 2015 Ben Harper is playing there and then, then on June 14th Ben Folds is playing…I’m just saying, I could go watch live music every day this summer and be a happy woman…of course that requires money for tickets.  Boo!

Why Geekology 101 you ask? Well, my horizons they are expandin', and I have discovered that I have barely scratched the surface of the amazing stories and avenues to explore. Want to take the journey with me? END_OF_DOCUMENT_TOKEN_TO_BE_REPLACED
This entry was posted on Tuesday, June 9th, 2015 at 3:16 pm and tagged with Cain's Ballroom, Concerts, Flogging Molly, Music, Radkey and posted in Music. You can follow any responses to this entry through the RSS 2.0 feed.
« Happiness v. Contentment
Dingo Ate My Baby Crazy »