Okay, so maybe this is a bit extreme, but in addition to the NE Aquarium, Freedom Trail, Salem, Fenway, and Sam Adams Brewery I had to tell you about the food (and beer). One of the great experiences of any vacation is trying out the local cuisine.  Coming from a landlocked state, I jump at any chance for fresh seafood, but all the food was excellent.

We started every morning at City Feed in Jamaica Plain (well, except for a morning we went to Whole Food to pick up some groceries).  Most days we just got coffee or tea, but the first morning I got a prosciutto scone.  I’d never really eaten savory scones before, but this is something I’m definitely going to have to try.

On the recommendation of our host, we also checked out Strega in Boston’s North End.  I had the most amazing dish of pasta with scallops, shrimp, spinach and their strega sauce.  Oh my gosh…delicious.  I still feel bad that my friend has a mild allergy to shell-fish, so she could only eat a bite of mine.  She said her pasta with eggplant was good, but not nearly as good as my pasta.

Union Oyster House takes its place as my favorite for the week, though.  Although the restaurant was founded in 1826, the building has been there for 250 years, and it played its own part in the founding of the United States.  The first paymaster for the Continental Army, Ebenezer Hancock.  At that time it was Capen’s silk and dry goods store.  The wives of Adams, Hancock and Quincy often sat here, sewing and mending clothes for the colonists.  A future king of France lived on the second floor in 1796.  Exiled from France, he taught French to Boston’s fashionable young ladies.  Louis Phillippe later returned to his country and served as king from 1830-1848.  The building later came to be called Atwood & Bacon, an oyster house, and some of Boston’s greats came to dine at the fabled semi-circular Oyster Bar, including Daniel Webster.  The Kennedy’s were also frequent customers, and there is a booth dedicated to the memory of J. F. K.  The Union Oyster House  has only had three owners during its long history. (All historic information comes from Union Oyster House website under “History”.)

The history of the establishment is not as impressive as its food, and that’s saying something.  Our first visit, I had baked haddock filled with seafood stuffing, roasted potatoes and asparagus.  Now, anyone who knows me will attest to the fact that I consider potatoes to be their own, essential, food group.  The fish was so tender and flavorful, that I skipped the potatoes in order to be able to eat more fish…yep, that good.  Our second visit, I had lobster ravioli.  Succulent, creamy and delicious…I didn’t bother ordering any sides or even a salad.

One of the first things a friend of mine, a Boston native, told me was that I needed to get Monkfish Marsala at The Daily Catch.  The North End location is tiny, and seats maybe 15 people total.  At first, I thought we weren’t going to be able to get in.  Every time we walked by their location there was a line down the street.  However, we managed to get there during the week for an early lunch, and there were two seats left.  Now I’ve never had monkfish before, but I swear the next time I had lunch with the friend who recommended it, all I could think about was that tender fish and savory/sweet sauce.  How am I supposed to go back to eating frozen seafood after this?

We couldn’t escape the North End without trying a couple of the Italian bakeries there.  Bova’s was first on our list.  Their eclairs and Boston Cream pie were as beautiful to look at as they were to eat.  A mad dash through the pouring rain didn’t even deter us from trying their pastry.  We also got a mini-cannoli to share.  That bite convinced me, I was going to need to explore further.  My favorite may have been Modern Pastry.  This is where I really got my first cannoli, and tried macaroons for the first time too.  You pick out your shell, filling and toppings and they make it for you right there.  I chose a crisp shell, dipped in chocolate with a traditional ricotta filling.  I’m going on a hunt for cannoli in Tulsa, but I’m afraid I’ve been spoiled.  Before trying the cannoli in Boston, I thought they were kind of like a cream horn that are readily available in bakeries here.  I’ve never been so wrong.  Instead of the overwhelming sweetness I was expecting, these were creamy but not quite as rich as a cream cheese filling and barely sweet at all.  They have a great balance between that crisp shell, light creamy filling, and dusted with powdered sugar for the perfect amount of sweetness. (now I’m hungry). 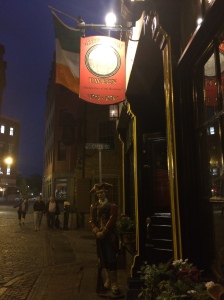 I can’t leave out the taverns.  We stopped for a beer at the Green Dragon, which was established in 1654.  Paul Revere, John Hancock, and Daniel Webster were all frequent customers.  John Hancock’s brother actually lived next door.  The plans for the invasion of Lexington and Concorde were overheard here, so this is really the beginning of Revere’s historic ride.  It gives me goosebumps every time I think about it.  Paul Revere and John Hancock discussed the ride in the same tavern I enjoyed a Sam Adams Summer Ale.

We also stopped at Bell in Hand, which boasts its status as the oldest tavern in America.  It was built in 1795.  When we dropped it there, it wasn’t what we expected.  It was more dance club than tavern, with flashing lights, loud music, and a plethora of twenty-somethings crowding up to the bar.  It reminded me of college.  We didn’t stay long, but we did have a beer there.

Of course, this being Boston, there was no shortage of Irish Pubs to be found.  Our first evening in town we stopped off at The Black Rose for a pint or two before heading back to the condo.   Like most Irish pubs, it didn’t disappoint, dim but warm atmosphere, a good bartender, and a group of drunken revelers made for an entertaining evening.

P.S. I discovered when we got home, that Benedict Cumberbatch arrived in Boston the week after we left…he also enjoyed cannoli at Modern Pastry.  Really?  A week after I left?  Well, Benedict, I hope you enjoy Boston as much as I did!