You may have noticed that I love live music.  I went to more shows, concerts and music festivals in 2013 than I even had time to write about for you!  Muse, Alabama Shakes, Center of the Universe Festival, Seether, ScotFest, Rascal Flatts, Jay-Z, and Zac Brown Band all in 2013, and it was marvelous!  (I think I may be forgetting some smaller ones too…oops!)  If I’m given the option, I will pick something with live music over just about any other form of entertainment.  I don’t even have to know who the performers are, just give me music.  This is the kind of enthusiasm worth sharing and passing down.  In an effort to infect someone else with this passion, this weekend I took my nephew to his first concert, and, man, did we pick a great one. Nico Vega, The Naked and Famous, and Imagine Dragons played at the BOK Center to a sold out crowd, and it was awesome.

Nico Vega opened, and although we missed the first song or two, the set was great. With her bouncing blonde ponytail, sparkling jumpsuit and contagious energy, she definitely got the crowd moving. Nico Vega’s lyrics and impressive voice definitely deserve a search on Spotify.

The Naked and Famous were next.  They come from New Zealand.  (I don’t know what that has to do with anything other than I want to go there.)  Their opening visuals were stunning, but their first song took my by surprise. The match up of vocals and beat were unusual, but not bad. Not something I could dance to, but it was definitely interesting. By the end of the song I enjoyed it.  The rest of the songs were wonderful, and I particularly enjoyed the male vocal lead and guitarist. They all had great stage presence and energy, and The Naked and Famous have earned a couple of spots on my playlist.

The main attraction took the stage in a swirl of light and fog. Imagine Dragons were even better than I expected. Dan Reynolds exudes enthusiasm and passion for his work and his audience. Never was that more apparent than this evening. The Imagine Dragons frontman became visibly emotional when talking about the importance of tonight’s performance. “This is a special night,” he said.  “Probably the most special night of the tour.”
All of the proceeds for the show went to the Tyler Robinson Foundation.  Tyler Robinson was introduced to the band three years ago when Tyler’s brother sent an email to Dan Reynolds. Tyler was sixteen and had cancer and was coming to a performance. The two struck up an unlikely friendship. One year ago Tyler succumbed to his illness, and Imagine Dragons teamed up with the Robinson family and the Tyler Robinson Foundation was born. The Foundation assists families with the unseen costs that all too often accompany a battle with childhood cancer.   With Tyler’s family in attendance, they dedicated Tyler’s favorite song “It’s Time” to their lost friend, and the crowd lifted up their voices to join in. I have never heard a more beautiful choir sing, and it don’t know of an individual there who wasn’t moved. 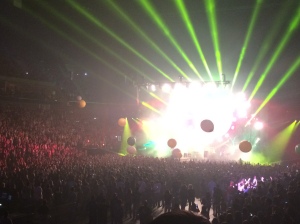 Then the party started.  These guys seriously rock.  They’re a new(ish) band, having formed just five years ago, and since then have skyrocketed. Even after winning a Grammy for “Radioactive” this year, you get the distinct sense they have a hard time believing that playing for a sold out arena is actually part of their lives.  They have fun with their shows, and a concert is always so much better when you can tell that the people on stage have fun with it and truly love what they do.  Imagine Dragons love what they do.

Between Dan Reynolds and guitarist Wayne Sermon playing the drums that scattered the stage, Wayne’s seriously awesome guitar solos, and the enormous confetti filled balloons that made an appearance during “Top of the World”, I think my nephews first concert will be far from his last.  He might even let me dance next time, because, let me tell you, refraining from dancing at this one was hard….really hard….really, really hard.  Once again, I left the show with no voice to speak of (which my nephew thought was hilarious), a new t-shirt, some great pictures to go with a perfect introduction to the world of live music.  Before we made it back to the car, he was already asking about the next one.  Enjoy it, kid.