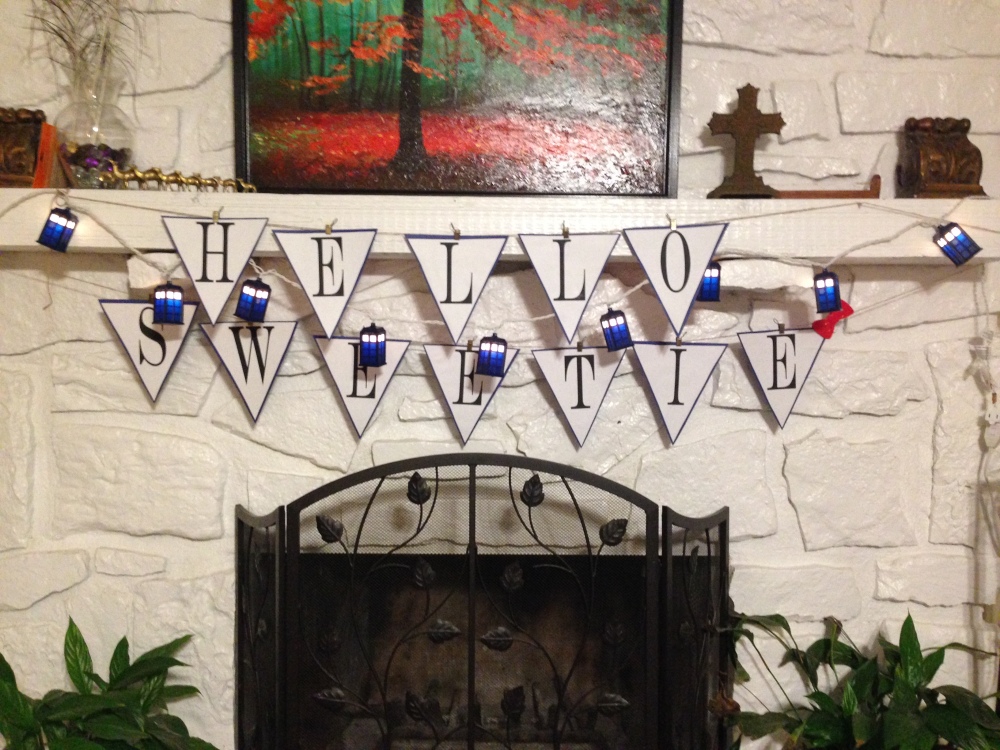 Hello Sweeties!  Well, I’ve done it!  I’ve thrown my first Doctor Who party.  When I was planning, I worried about it feeling like a 10 year old’s party…with adult beverages.  One of these days, I’ll learn not to worry so much.  It didn’t feel childish at all…I left off the coloring pages and props…maybe that made a difference?  All in all, if there weren’t an abundance of Doctor Who references from everything the food to “props”, it would have just been a lovely…blue and silver party…with stars.

For this party, just blue and silver wouldn’t cut it.  This is the 50th Anniversary of Doctor Who for crying out loud!  It was also my birthday party, so there was no halfway.  The TARDIS made an appearance…or three, and a Dalek tried to “Exterminate!” the bread. My friends and family definitely Exterminated all the food.  (One day I will remember that there are never leftovers, but there is always enough.)  I should just stop stressing out about it.

If you’re thinking of your own Doctor Who themed party, I’ve included recipes or links for the food, directions or links on how to make the decorations, and…anything else I can think of.  For those few people attending who were not Whovians, I made sure that everything had a little sign to indicate how it related to the show.  I mean otherwise, it is just a lasagna with a face!  I used Pinterest a lot to get ideas several months ago, but, when it came down to it, I didn’t do anything the exact way the directions suggested.  If you want to see some other ideas, check out my Theme Parties board.

Lost Moon of Poosh (a moon made of cheese!) I just bought a tasty cheese ball and some crackers.

Chop at least 4 garlic cloves and brown in a little olive oil, 1 package cherry or grape tomatoes into the pan with the garlic and cooked until the tomatoes release their juices (I usually cut 1/3 or so of the tomatoes in half to help this), top with fresh basil and fresh mozzarella pearls.  Pour this light tomato sauce over al dente pasta. (Bow Ties in this case)

Brown 1lb lean ground beef & mix with favorite marinara (I have a good recipe, but I used store-bought because of time issues.)  Spread a bit of sauce in the bottom of the baking dish to prevent sticking and layer lasagna noodles on top. (I use oven ready noodles because of time, and they are so much easier than traditional noodles!)  Top noodles with meat sauce and layer a few good spoonfuls of good ricotta cheese on top of that.  Repeat noodles, sauce, ricotta until you reach the top of the dish.  Then top with sauce and shredded mozzarella. Bake at 350 for 1 hour.  To make Cassandra’s face, slice a radish, top the radish with sliced black olives, and cut lips out of a red bell pepper. (Please put Cassandra’s face on after cooking…otherwise it isn’t pretty.)

Celery is for Wearing, Not Eating Salad

This is just a bagged salad with sliced celery (tops with leaves just…somewhere), red pepper, radishes, tomatoes, and black olives (left over from Cassandra’s face)

Just garlic bread with a Dalek wind-up toy next to it…to “Exterminate!” the bread.  I’m sure I could have made it look like a Dalek, but…time. 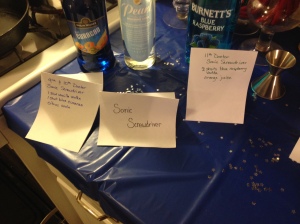 The blue sonic screwdrivers were by and large the most popular of the evening.  Very tasty, and the citrus soda made them “sparkle”.

citrus soda (something clear like 7-up, Sprite, or Sierra Mist is better)

A slice of lime

The 11th Doctor’s green sonic screwdriver was very tasty also, but it didn’t have as many takers.  I think that a splash of citrus soda would be great here too.  You know…sparkly.

Still Not Ginger, Dinosaurs on a Spaceship Cookies (with edible ball bearings)

Otherwise known as how many Doctor Who things can I fit into one dish!  I love this sugar cookie and icing recipe!  It is pretty much the best one I’ve come across.  Perfect for using cookie cutters too, and the icing makes the cookies stackable without getting too hard. (Why did no one take a picture of my lovely cookies?  Oh right, they were too busy eating them!)  A triceratops cookie cutter and gray sugar pearls made this…perfect.

Huge thank you to my friend for the birthday cake.  It is wonderful!  My favorite is yellow cake with Chocolate Frosting, and that is just what I received!  She drew a much better icing TARDIS than I would have been able to.

These are super easy.  Jumbo marshmallow, and you can attach the regular size ‘mallows either with icing as glue or with toothpicks (1.  Cut the toothpicks in half, it works better. 2. Warn people there are toothpicks….I know, but the last thing you want is for someone to swallow half a toothpick.)  The faces were drawn on with black gel icing.  I used a toothpick to get a fine enough line.

There were bunches of other items pertaining to the life of  The Doctor strewn about.   I got a TARDIS mug for my birthday that made an appearance along with an astronaut stress toy and a high-heeled shoe.  Can you tell I like River Song?

What did we do?

Doctor Who…stuff was playing in the background for…everything.  The week leading up to the party BBC America had a schedule full of Doctor Who specials, and I made sure they were all DVR’d and queued up for the party.  Since there was a marathon on, we just ended up watching that.  So, The End of Time Part 2 led us into the broadcast at 7:00pm CST.  Yes, we had emotional trauma for fans just before the big event.

There was the 50th Anniversary Doctor Who edition of Monopoly available for playing, but, as usual, we were too busy talking and laughing to pull out the games! We saved that for the guests who stayed the night.  Coffee and being thrashed at Doctor Who Monopoly…always a great way to begin the day!  I have to give serious kudos to the winner.  There were no hotels left to purchase…he bought them all.  An unlucky trip around the board was going to cost you at least $4,000 Monopoly money.  I would earn just enough income to pay rent after I mortgaged…everything.  Then I’d pay off the mortgage and earn enough income to pay rent the next time I landed on….anything!

Decorations turned out great!  There was banner hanging from the mantle that said “Hello Sweetie”.  I just used TARDIS blue card stock to give the printed letters some substance.

A star mobile that hung from the light fixture above the dining table.  3 Chic Geeks gave me the idea, but I had to go and add glitter and stars of different sizes.  It was lots of fun, but I will never get all the glitter out of my…entire house.  The “Bad Wolf” graffiti was a big hit too.  My wonderfully evil self really wanted to print a poster sized weeping angel to hang behind the door in the bathroom…because it is scary!  However, I refrained…or I ran out of time…whichever…maybe next time.  All the tableware was blue and silver and the table and book case were scattered with silver star confetti.  I also couldn’t resist some star garland on a wire to weave about…anyplace flat.

A couple of people asked me what I was going to do with all the decorations I made.  Well, I’m keeping them, of course!  I received a Whovian Cookbook for my birthday….oh, I think I see more Doctor Who parties in my future.

I watched The Day of the Doctor during the simulcast that afternoon.

1) I know me.  There was no way that I would be able to sit still and not be checking on my guests constantly while the show was one.  However, I wasn’t missing a second of it either!

Since I cannot travel in time, my DVR worked just fine for this lovely occasion.  It also helped that BBC America rebroadcast it in the evening.  My guests ended up not needing much attention during the show, they were a bit occupied with what happened on-screen.  This did give me a chance to watch for all the little tidbits the creators like to throw in there for our viewing pleasure.  The hardest part was keeping my mouth shut. (Always a challenge!)  No spoilers!

All in all it was a pretty laid back kind of evening (with decorations).  Once again, I have to give huge kudos to my friends who are “Fantastic” all on their own.  There was virtually no clean up for me,  they jumped in with a “Geronimo” and had most of the work done for me.  All I had left to do was slip into my TARDIS pajamas and head off to dream of the next theme party I can concoct….Sherlock anyone?