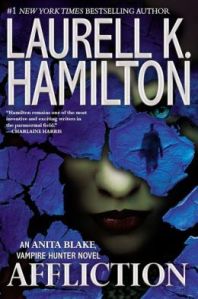 The Universe was telling me I had to read Affliction by Laurell K. Hamilton…now….no waiting for the paperback.  See, I had a trip to Houston this week, just for the day, and apparently I’m not at my best at 4:30am.   On the way, I had work to do, and on the way home I worked on a short story I’ve been playing with…until I ran out of paper in my notebook.  I didn’t bring a book, nook, headphones, iPad and my laptop battery died.  Seriously?  I can’t remember the last time that I left home without a book in my purse or a spare notebook and pen.  Therefore, I had to buy a book at the airport.  I am not a sit quietly and do absolutely nothing kind of girl.  After scouring shelves for a paperback that caught my fancy, something blue caught my attention out of the corner of my eye.  I waffled a bit, I can’t lie.  Usually, I’ll check the hard cover out of the library, but wait to buy Ms. Hamilton’s books until they come out in paperback.  Books are expensive in hard cover, and Affliction is the 22nd Anita Blake: Vampire Hunter novel…I own all of them…a paperback would match the others.  The waffling lasted all of maybe five seconds before I trotted up to the counter to pay for my entertainment.

If you haven’t read any of the Anita Blake books, start at the beginning with Guilty Pleasures.  The full list, in order, is below.  Set in St. Louis, vampires have been given equal rights by the Supreme Court.  They are people now.  Lycanthropes are out there too, but they don’t have the same rights as people, at least not yet.  The characters develop so beautifully over the subsequent books, and that arc is so fun to read…and re-read again and again.  Sometimes, I’ll go back to read the early novels and I just want to give her a hug…or warn her away…or laugh because I know she is SO changing her mind about that in a few books.  LKH never disappoints, and Affliction is no exception.  Filled with bad guys (both preternatural and human), good guys, emotional landmines, and a special brand of romance, her books are fraught with one disaster or near disaster after another.  For books about the paranormal, the characters are relatable.  Anita likes to pick at her relationships, and uncovers damage, strength and insecurities that most of us would never show the world.  Some of these I can see in myself sometimes, and it makes you love or hate the characters all the more because of it.

In Affliction,  I found myself smacking myself in the forehead and saying out loud, “Asher, what have you done NOW.”  Mentally begging someone 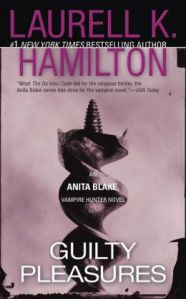 to pull their head out, so they can see what’s in front of them, and shaking my head because I was sure her irrational jealousy was going to get her or someone else killed.  I usually read Ms. Hamiton’s books in one shot, because I simply have to see what happens.  They are those “just one more chapter” kind of books that are hard to put back down to go back to normal life.  There are cliffhanger chapters that are nearly impossible to walk away from.  I felt bereft every time I had to walk away.  These are characters and stories I dream about if I have to sleep mid-book, and Affliction wasn’t any different than the last 21 Anita books.  This book, my schedule demanded that:

1) I put it down to sleep, at least four hours the first night.  I was NOT happy, and my dreams were filled with Anita, vampires, weres of all shapes and sizes and, of course, zombies.  You can’t have Anita without zombies.

2) I put the book down to go to work.  That’s what keeps me in books.  It was done grudgingly, and with a chapter or three read over breakfast…I may have been a bit late for work too.

3) I put to book down to talk to people who actually deserved an answer, and didn’t know better than to talk to me while I’m reading (especially the last 20 pages of a book).  I managed polite, but I don’t know about friendly.

Anita Blake is not only a vampire hunter, she’s also an Animator…she raises the dead.  Yep, that’s zombies. That’s her day…well, it is the job she gets paid for.  You have to raise zombies at night.   Until now, she’s never really been afraid of them.  She’s always known what to expect, because raising the dead is something that she had to learn NOT to do.  As she says:

Most animators need practice and training to raise the dead; I got training so I could stop doing it by accident.  A beloved dog that crawled into bed with me when I was fourteen, roadkill that followed me like I was some nightmarish Pied Piper, and finally a college professor who had committed suicide and came to my dorm room so I could tell his wife he was sorry.  I wondered if the lone shambling zombies that they’d occasionally find wondering around were accidents from untrained animators like I had been once.

These zombies are nothing she’s ever seen before, and Anita is afraid.  When The Executioner, preternatural expert and all around badass (it really doesn’t matter that she is a petite woman) has no idea what’s going on, you know you’re in trouble.  Micah’s estranged father is dying.  They knew the trip would raise issues they would rather let die, but this was not what they had in mind.  Who knew that going home would this dangerous?

Have you started to notice that I love books with great characters.  This series has great characters, in every sense.  Quirky, endearing, dangerous, maddening, lovable, frustrating, terrifying, funny, and human; more often than not these traits all come around in one person.  As I re-read that last sentence, I think of all the other characters I love and love to hate in this series and realize that I could list the whole gamut of personality and emotion here, and you still won’t know what I’m talking about until you read about them. She doesn’t shy away from any aspects of their personality, even (thankfully!) their sexuality, so be prepared.

However, good books are not driven by characters alone (although, I do think that a great character can save a mediocre plot).  I really liked the plot in this one (and all the others).  Although at first, I was sure that I knew what was going to happen.  Really wrong about huge parts of that, and I should have known better…forgive me.  I figured out who the baddie had to be, but couldn’t figure out how it happened or where the badness boost came from.  The story moves fast, and there’s sub-plots and relationship arcs and…and…nope, can’t say anything else…spoilers.  The details are great too, and you can tell that there is some serious research behind weapons, police procedure, etc.  Sometimes you even get unexpected biology lessons…no, I’m not joking.

A personal aside, to Ms. Hamilton…thank you, thank you, thank you for more of Jean-Claude in this book.  I had missed him, a lot.  I needed more of him.  I was worried that he was starting to feel ignored.  (I do know he’s fictional, thank you very much.)  Truly, you’ve made so many characters such an integral part of Anita’s life that, while I know everyone can’t be on stage all the time, I miss them when they aren’t there.  Thank goodness for re-reading old books.  They are a balm when I am missing certain characters.

Laurell K. Hamilton has another series sourrounding a Faerie princess, Merry Gentry that is definitely worth a look as well…I have all of the Merry books as well.  We’re all waiting anxiously for the next in the series.  The author is also on Twitter, @LKHamilton.  Through her tweets, I’ve been introduced to a lot of great authors, like Neil Gaiman (as I mentioned in my very first real post), and she also gives quite a bit of insight into her writing process through the tweets and her blog.  The good days and the bad.

My gun was digging into my back, so I shifted forward in my  office chair.  That was better; now it was just the comforting pressure of the inner-skirt holster, tucked away underneath my short royal blue suit jacket.